You could think cycling is totally degrowth. Or is degrowth cycling? After our absolutely inspiring tour from Vienna to the climate camp in Lusatia we couldn’t wait to get on our bikes for the next tour. Making some flags, preparing the bikes (this time with the wonderful bikekitchen), planning the route, writing the packing list – and off we go… No, getting started was never our strong point. So we started with a few hours delay, but highly motivated. 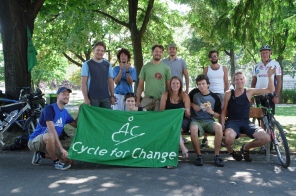 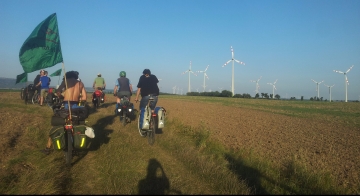 Besides our “old stagers” we had some newbies joining. Among them was Christian, who was cycling already since July from England via Germany to Vienna, carrying a lot of cameras for his “open documentary”. He was also planning to go to the Degrowth conference and action week in Budapest. His great cargo bike turned out to be an optimal carrier for fruits and vegetables without leaving any dents. Awesome! This way we could save a box of bananas from being trashed already on the first day. It wasn’t much needed anyways, because we basically ate them all on the spot. What was that again about group dynamics? 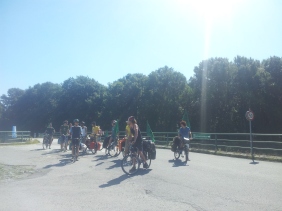 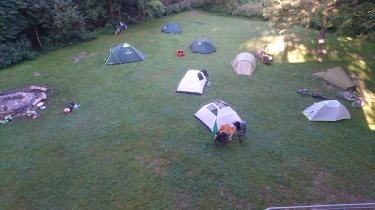 The first night we spent at the “Donauterrassen”, a place we can recommend to everyone in Vienna. It’s a small meadow directly at the Danube with camping for free. It’s a half-day trip away from Vienna and really nice. On the next day we went on to Slovakia with a short stop at the capital Bratislava for a lunch picnic. In the heat of the East European late summer we went on and found, like a mirage, a beautiful swimming lake. We can only guess what the other swimmers were thinking about this group of cyclists suddenly jumping naked into the lake. In the evening we already crossed the Slovak-Hungarian border, entering Forint-country. Here more group dynamics started, resulting in discussions later on. Potato chips, potato chips, potato chips – now you know it. 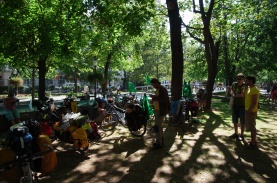 After a night at a nice empty campsite (with peak human-bike, who understands this? ;-)) we continued upcountry via Györ to Pápateszér. That’s where the environmental organization Reflex has an educational center in a tiny Hungarian village, where we could pitch our tents. The route went through the Hungarian “mountains” which were more strenuous than one would expect. The first (wait, the only?!) flat tire, unbearable heat and the concern not to be able to build up our dwindling food stocks pushed some of us to their limits. Luckily, there were watered football fields (open air showers!) and neighbors giving away bread, just like that. Amazing! 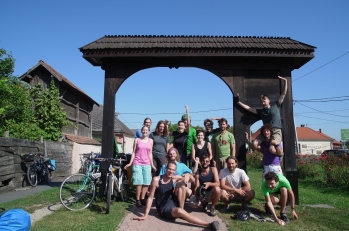 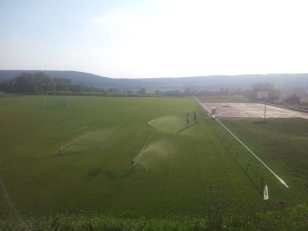 On the next day, we went back to the Danube. Since you can cycle on both sides we changed the country for one day. Hello Slovakia again. Little did we know which weird creatures we would encounter. At a short break we were chased by two mud monsters, which drew our attention with a show, searching for hugs and love. Oh shit, where are Niko and Freddy? The giant pizzas that followed in Esztergom were anyways gone so fast that there was no doubt about presence of all cyclists. 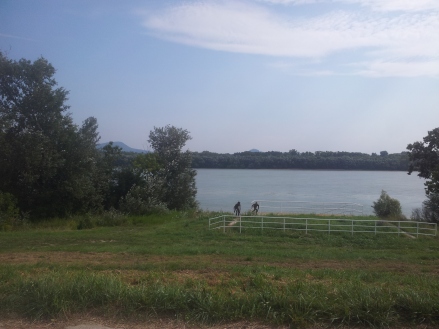 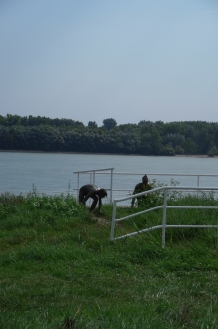 Since we arrived in Budapest already on the next day and I still owe you the potato chips story, here it comes: How “degrowth” are potato chips? For some reason we started early on to include a number of potato chip packages in our food supplies, which were usually gone pretty fast. But how does this match with degrowth? During our journey we kept an eye on the reason of the tour. We often asked ourselves how we can make this journey as “degrowthest” as possible. Since our means of transportation were already decelerated and low in emissions, we often talked about our food. As the main problem we identified the discrepancy between the big appetite – which is at least three times as big with physical activity like cycling – and possibilities to get food in supermarkets. Considering that most of our food shopping took place when we were craving for energy, we realized that we could improve sustainability (despite being animal produce free already). We learned that one could solve this problem only without a strict scheduling of days and routes. With more time and less kilometers per day it would probably be possible to organize a more sustainable food supply (e.g. asking locals for leftovers or search for organic food stores). We will keep this in mind for the next tour. Maybe cycling by itself is not degrowth and degrowth not only cycling, but transportation in a post-growth society doesn’t work without bicycles. In this spirit: Cycle for Change!!! 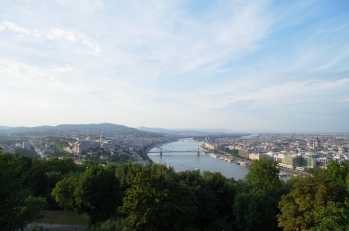